Sacred Trees of the Celts and Druids 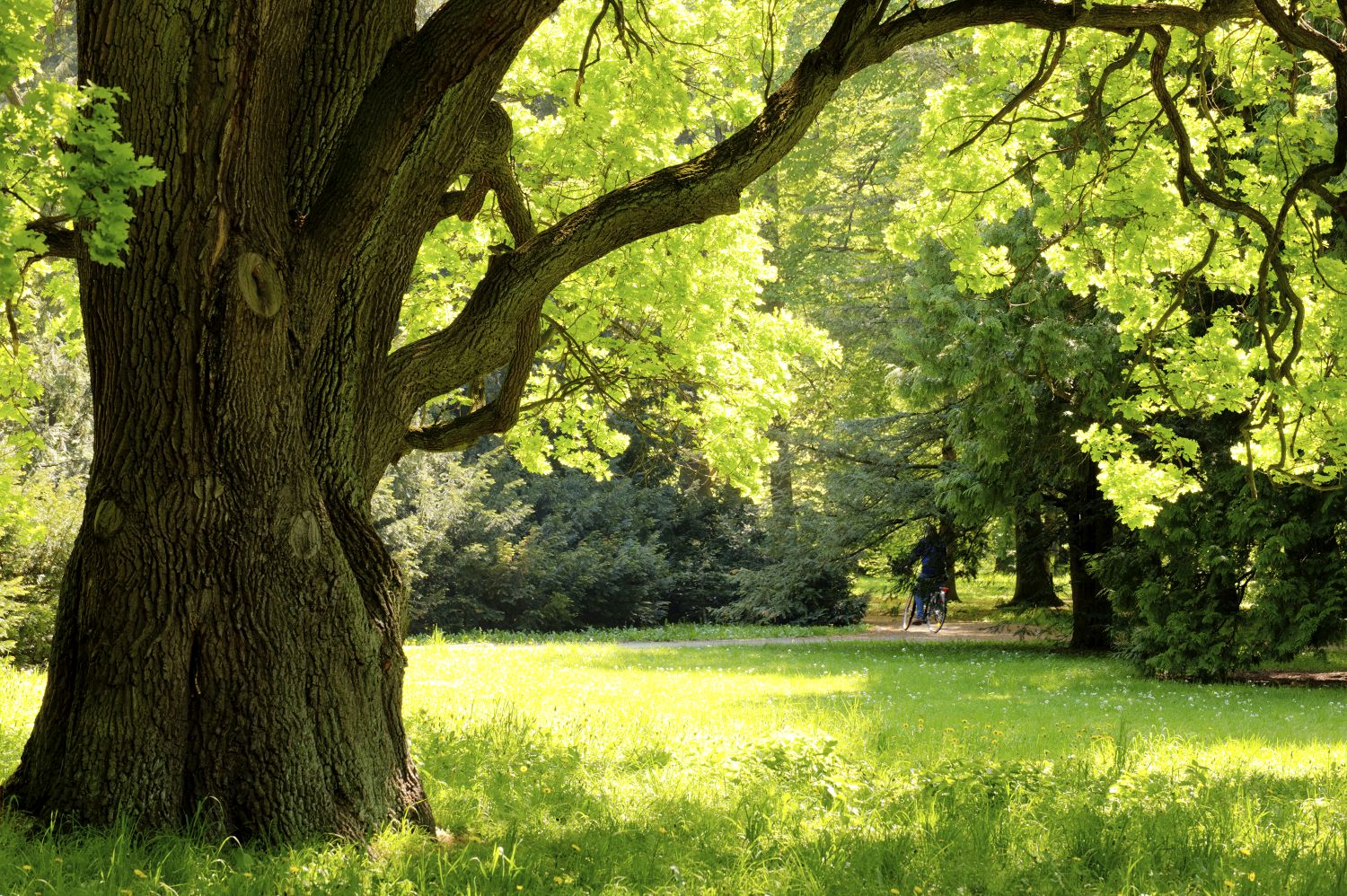 To the Celts, Druids and many other peoples of the old world, certain trees held special significance as a fuel for heat, cooking, building materials and weaponry. In addition to this however, many woods also provided a powerful spiritual presence. The specific trees varied between different cultures and geographic locations, but those believed to be "sacred" shared certain traits. Unusual size, beauty, the wide range of materials they provided, unique physical characteristics, or simply the power of the tree's spirit could grant it a central place in the folklore and mythology of a culture. Even our modern culture finds that certain trees capture our imagination. The mighty oak, the mystical yew and so many others are reminders of the power that trees have on our lives.

Trees are living things, filled with the essence and energy and of the Elementals and Mother Earth with an aura of power which is visible to those who are in total balance and harmony. The lore which surrounds a particular tree or wood often reflects the power the old ones sensed and drew from their presence.

This tree was sacred to the Druids. The pith is easily pushed out of green shoots to make whistles. Several shoots bound together by cordage, can be trimmed to the desired length for producing the note you want and used to entice Air elementals. The old superstition of "whistling up the wind" began with this custom.

Another sacred tree to the Druids. It is said that you may cut an apple into three pieces, then rub the cut side on warts, saying: "Out warts, into apple." Then bury the pieces and as the apple decays, the warts will disappear. Use apple cider in any old spells calling for blood or wine. Apple indicates choice, and is useful for love and healing magic.

A Druid sacred tree. Druid wands were often made of ash because of its straight grain. Ash wands are good for healing, general and solar magic. Put fresh ash leaves under your pillow to stimulate psychic dreams.

Known as Lady of the Woods, Paper Birch and White Birch. Carefully gather strips of the bark at the New Moon. With red ink, write on a birch strip: "Bring me true love." Burn this along with a love incense, saying "Goddess of love, God of desire, Bring to me sweet passion's fire." The specific name of a god/goddess may be added. Or cast the bark into a stream or other flowing water, saying: "Message of love, I set you free, to capture a love and return to me." *Remember* It is unwise to use this incantation and ritual directed toward a specific person as that would violate the rule. If a love is to come to you, it must be of that persons free will to do so.

Blackthorn is a winter tree. Its white flowers are seen even before the leaves in the spring. It is black barked with vicious thorns and grows in dense thickets. The wood is used in the cudgel shillelagh and Blasting Stick. Its thorns are used to pierce waxen images. Blackthorn indicates strong action of fate or outside influences that must be obeyed.

Also known as Scotch Broom or Irish Broom. It can be substituted for furze (gorse) at the Spring Equinox. The Irish called it the "Physician's power" because of its diuretic shoots. Sweep your outside ritual areas with it to purify and protect. Burning the blooms and shoots calms the wind. Be cautious if you plant Broom however, it will quickly multiply.

Also known as the Tree of Life, Arbor Vitae, Yellow Cedar. Ancient Celts on the mainland used cedar oil to preserve the heads of enemies taken in battle. To draw Earth energy and ground yourself, place the palms of your hands against the ends of the leaves.

Also known as Ellhorn, Elderberry, Lady Elder. Sacred to the White Lady and Midsummer Solstice. The Druids used it to both bless and curse. Standing under an elder tree at Midsummer, like standing in a Fairy Ring of mushrooms, will help you see the "little people." Elder wands can be used to drive out evil spirits or thought forms. Music on panpipes or flutes of elder have the same power as the wand. Remember the words of the Rede. Elder is the Lady's Tree, burn it not or cursed ye be!

A slightly fibrous, tan-coloured wood with a slight sheen. Elm is often associated with Mother and Earth Goddesses, and was said to be the abode of faeries, explaining Kipling's injunction; "Ailim be the lady's tree; burn it not or cursed ye'll be". Elm wood is valued for it's resistance to splitting, and the inner bark was used for cordage and chair caning. Elm adds stability and grounding to a spell.

Fir is a very tall slender tree that grows in mountainous regions on the upper slopes. Fir cones respond to rain by closing and the sun by opening. Fir can see over great distance to the far horizon beyond and below. Fir indicates high views and long sights with clear vision of what is beyond and yet to come.

Also known as the Birth Tree. The needles are burned at childbirth to bless and protect the mother and baby.

Also known as Gorse, Whin. Its golden flowers are associated with the Spring Equinox. Wood and blooms are burned for protection and preparation for conflict of any sort.

Wands made of this wood symbolize white magick and healing. Forked sticks are used to find water or buried treasure. If outside and in need of maigckal protection quickly draw a circle around yourself with a hazel branch. To enlist the aid of plant fairies, string hazelnuts on a cord and hang up in your house or ritual room. Magically, hazel wood is used to gain knowledge, wisdom and poetic inspiration.

A beautiful white wood with an almost invisible grain; looks very much like ivory. Holly is associated with the death and rebirth symbolism of winter in both Pagan and Christian lore and is important to the Winter Solstice. In Arthurian legend, Gawain (representing the Oak King of summer) fought the Green Knight, who was armed with a holly club to represent winter. It is one of the three timbers used in the construction of chariot wheel shafts. It was used in spear shafts also. The qualities of a spear shaft are balance and directness, as the spear must be hefted to be thrown the holly indicates directed balance and vigour to fight if the cause is just. Holly may be used in spells having to do with sleep or rest, and to ease the passage of death. A bag of leaves and berries carried by a man is said to increase his ability to attract women.

Its berries were used with thyme in Druid and Grove incenses for visions. Juniper grown by the door discourages thieves. The mature berries can be strung and hung in the house to attract love.

Also known as Birdlime, All Heal and Golden Bough. It was the most sacred tree of the Druids, and ruled the Winter Solstice. The berries are poisonous! Bunches of mistletoe can be hung as an all-purpose protective herb. The berries are used in love incenses.

Oak has been considered sacred by just about every culture that has encountered the tree, but it was held in particular esteem by the Celts because of its size, longevity, and nutritious acorns. The oak was the "King of Trees" in a grove. Magick wands were made of its wood. Oak galls, known as Serpent Eggs, were used in magickal charms. Acorns gathered at night held the greatest fertility powers. The Druids and Priestesses listened to the rustling oak leaves and the wrens in the trees for divinatory messages. Burning oak leaves purifies the atmosphere. It can be used in spells for protection, strength, success and stability; the different varieties will lend their own special 'flavour' to the magic.

The Pine tree is an evergreen, its old title was "the sweetest of woods." It was known to the Druids as one of the seven chieftain trees of the Irish. Mix the dried needles with equal parts of juniper and cedar and burn to purify the home and ritual area. The cones and nuts can be carried as a fertility charm. A good magickal cleansing and stimulating bath is made by placing pine needles in a loose-woven bag and running bath water over it. To purify and sanctify an outdoor ritual area, brush the ground with a pine branch.

Also known as Mountain Ash, Witchwood and Sorb Apple has long known as an aid and protection against enchantment. Sticks of the Rowan were used to carve Runes on. Rowan spays and crosses were placed over cattle in pens and over homes for protection. Its lovely red berries feed the birds in winter. The berries have a tiny pentagram on them and are especially poisonous. The pentagram is the ancient symbol of protection. The Rowan tree indicates protection and control of the senses from enchantment and beguiling. The Rowan was sacred to the Druids and the Goddess Brigit. It is a very magical tree used for wands, rods, amulets and spells. A forked Rowan branch can help find water. Wands are for knowledge, locating metal and general divination.

Also known as White Willow, Tree of Enchantment and Witches' Asprin. Once of the seven sacred trees of the Irish, a Druid sacred Tree. The willow is a Moon tree sacred to the White Lady. Its groves were considered so magickal that priests, priestesses and all types of artisans sat among these trees to gain eloquence, inspiration, skills and prophecies. For a wish to be granted, ask permission of the willow, explaining your desire. Select a pliable shoot and tie a loose knot in it while expressing what you want. When the wish is fulfilled. return and untie the knot. Remember to thank the willow and leave a gift.

Also known as English Yew and European Yew. Another important tree to the Winter Solstice and the deities of death and rebirth. It is a beautifully smooth, gold-coloured wood with a wavy grain. The Irish used it to make dagger handles, bows and wine barrels. The wood or leaves were laid on graves as a reminder to the departed spirit that death was only a pause in life before rebirth. All parts of the tree are poisonous except the fleshy covering of the berry, and its medicinal uses include a recently discovered treatment for cancer. The yew may be the oldest-lived tree in the world. Ancient yews can be found in churchyards all over Britain, where they often pre-date even the oldest churches. There are some convincing arguments for it being the original 'World-tree' of Scandinavian mythology. The Yew may be used to enhance magical and psychic abilities, and to induce visions.